The director of the FBI has said the Jewish community in the United States is “under attack from all sides” and “desperately” needs more support from the agency amid an apparent rise in anti-Semitic attacks.

In response to a question from US Congressman Josh Gottheimer about the recent failed attacks on synagogues in New Jersey, FBI Director Christopher Wray said Thursday that he was trying to address the issue by elevating the anti-Semitic threat to a “national priority.”

“Antisemitism and the violence that flows from it is a persistent and present reality,” Wray said.

About 63 percent of religious hate crimes are motivated by antisemitism, he said, “and it targets a group that makes up about 2.4% of the American population.”

“This is a community that deserves it and desperately needs our support because it’s getting hit from all sides,” Wray added.

Threats of domestic terrorism related to hate crimes and anti-Semitism have been “elevated to national threat priority,” Wray said.

The FBI is also working proactively, foiling a planned hate crime against a synagogue in Colorado, he said. “We were able to make an arrest,” Wray said, noting the failed raid in New Jersey. 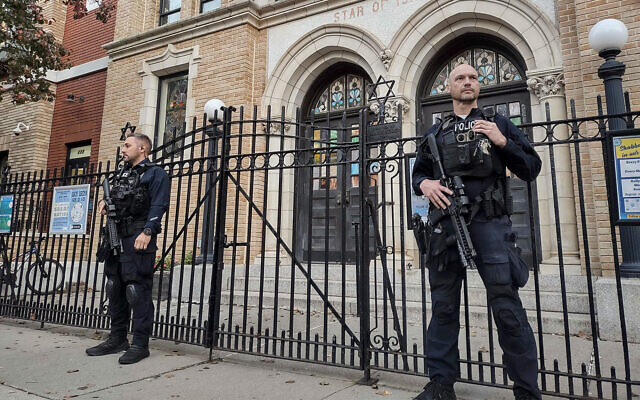 Federal prosecutors charged a New Jersey teenager with extremist Islamist views over threats that led to a widespread FBI alert to the state’s synagogues earlier this month.

Lire Aussi :  Biden and Macron affirm commitment to Ukraine but diverge on willingness to speak with Putin

Omar Alkattoul, 18, pledged allegiance to the Islamic State leader and conducted research on past mass shootings and how to obtain guns, according to a criminal complaint filed last week by the U.S. attorney’s office in New Jersey. The complaint alleges that Alkattoul published a manifesto online that said it had already been attacked.

New Jersey is home to an estimated 500,000 Jews, with major Orthodox population centers in Lakewood, Passaic, Toms River, and Teaneck, and congregations of all denominations in most cities and towns throughout the state.

In April, an anti-Semitic attacker went on a rampage in Lakewood, stabbing several Jews and leaving the community on edge. The suspect has been charged with federal hate crimes.

In 2019, New Jersey saw its worst anti-Semitic attack in recent years, when two assailants opened fire at a kosher supermarket in Jersey City, killing the Jewish owner and a Jewish customer and a store employee.

There have been many attacks on synagogues in the United States in recent years, including the 2018 shooting at the Tree of Life congregation in Pittsburgh, Pennsylvania, which killed 11 people — the deadliest attack ever on a Jewish community in the United States.

A report released by the Anti-Defamation League found the highest level of reported anti-Semitic incidents in the US during 2021 since the organization began tracking the problem in the 1970s.

Agencies contributed to this report.

I joined The Times of Israel after many years covering US and Israeli politics for Hebrew news outlets.

I believe that responsible coverage of Israeli politicians means presenting a 360-degree view of their words and actions – not just reporting what happens, but what it means in the broader context of Israeli society and the region.

That’s hard to do because you can rarely take politicians at face value – you have to go the extra mile to present the full context and overcome your own biases.

I am proud of our work telling the story of Israeli politics Directly and comprehensively. I believe Israel is stronger and more democratic when professional journalists do that hard work better.

Support our work by joining Times of Israel Community It helps ensure that we can continue to do so.

You are a devoted reader

We are really glad you read it X Times of Israel articles In the last month.

That’s why we launched The Times of Israel ten years ago – must-read coverage of Israel and the Jewish world for discerning readers like you.

So now we have a request. Unlike other news channels, we have not put up a paywall. But because the journalism we do is expensive, we invite The Times of Israel’s core readers to help support our work by subscribing. Times of Israel Community.

thanks,
David Horowitz, founding editor of The Times of Israel