Here we are, almost two weeks before the World Cup, FIFA President Gianni Infantino and General Secretary Fatma Samoura made their call to arms, landing in the arms of the football associations competing in the tournament in Qatar.

The email arrived at around 7pm (UK time) on Thursday night and within three hours it was leaked and found its way onto the Sky News website.

The duo continued: “We know that football does not live in a vacuum and we are equally aware that there are many challenges and difficulties of a political nature around the world.

“But please do not allow football to be drawn into every ideological or political battle that exists.”

So the message was clear. Head down, know where you are, stay calm and stick to the foot.

For those who have the misfortune to follow Infantino for a living, the new limitations of football’s transformative power may come as a surprise.

It contrasts, for example, with a moment earlier this year of what can only be described as Peak Infantino. The stage was Davos, the Swiss Alps resort, and the World Economic Forum in May. For starters, Davos is a kind of self-important hell designed for Infantino, as the world’s richest and wealthy contemplate ruminating on their own potential to cleanse the world of any and all ills. 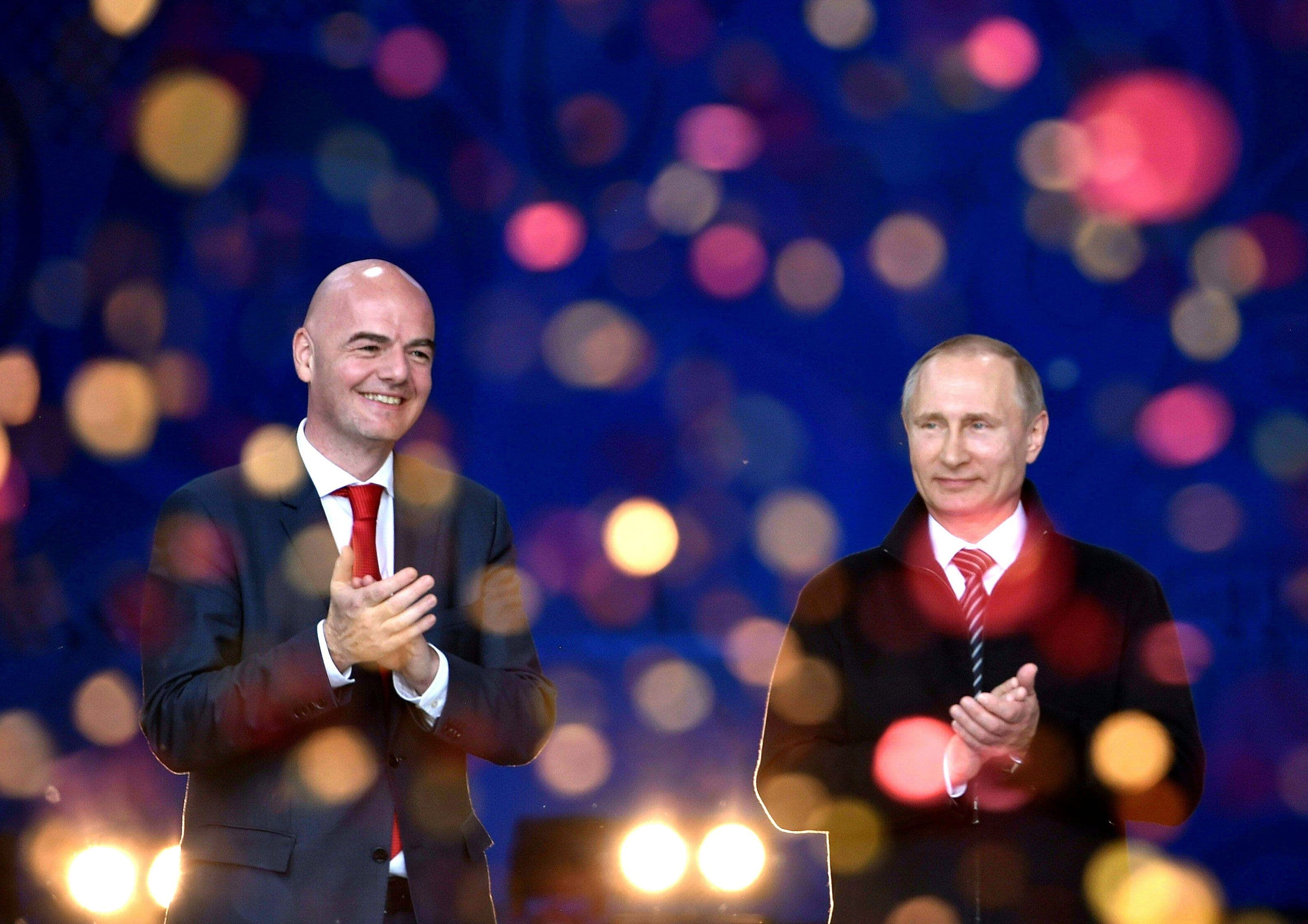 Infantino said: “(Nelson) Mandela was saying that sport can change the world, it can inspire, it unites, and he was right. Football, as the most popular sport in the world, has a unique reach.”

A little over five months later, it appears that Infantino’s revolutionary fervor has left him behind. Thursday night’s letter did not directly mention any of the more controversial aspects of this year’s World Cup in Qatar, most notably the treatment of migrant workers who built the stadiums, and homophobic laws that threaten the safety of gays, Qataris and visitors, such as. As well as FIFA’s calls for a position on Iran, whose drones support Russia in the bombing of Ukrainian territory, not to mention the current protests taking place in the country over women’s rights.

But the letter seems to strongly suggest that it is not wise for federations to focus on such issues.

The letter continued: “At FIFA, we try to respect all opinions and beliefs without giving moral lessons to the rest of the world.

“One of the world’s greatest strengths is indeed its diversity itself, and if inclusion means anything, it means respect for that diversity. No people, culture or nation are “better” than anyone else.

“This principle is the bedrock of mutual respect and non-discrimination. This is also one of the core values ​​of football. So, please, let us all remember that and let football take center stage.”

At this point, it may be useful to remind Infantino about the way the world works. When he calls on football not to be “dragged into every ideological battle,” perhaps he needs to be told that homosexuality is not an ideology. It is the way in which a human being is born; It’s inside of us, who we are, and who I am. If we accept that someone’s sexuality is inherent, and that it is about nature rather than nurture, we also realize that criticizing or criminalizing a person for their sexuality is clearly irrational.

This argument seems to be that true tolerance means tolerance of violent and harmful bigotry. This means that the worldview of two loving women, married and raising children together, has the same value as, for example, Salah al-Yafei. This man describes himself as an “educational consultant” at Qatar’s Aspire Academy, which houses Qatar’s most talented young sports stars. He has 60k followers on Instagram and mentioned a recent video: “In the face of the overt promotion of homosexuality, rejection in your expression and behavior has a huge impact on children, because it conveys to them the message that this is a perverted thing and we should not do it. I do not accept it.” Such is the life of shame for gays in Qatar, where homophobic rhetoric treats a person’s natural state as a disease that should at best be suppressed or at worst treated.

Two weeks after the tournament ended, Infantino’s words fell like a bucket of a cold with those who believed that broadcasters, media, unions and journalists should have the freedom to scrutinize the hosts of the world’s most popular sports tournament. As such, it’s not only unfortunate content but also amazingly dumb as a strategy, alienating those FIFA may want to stay by its side for the next few weeks. 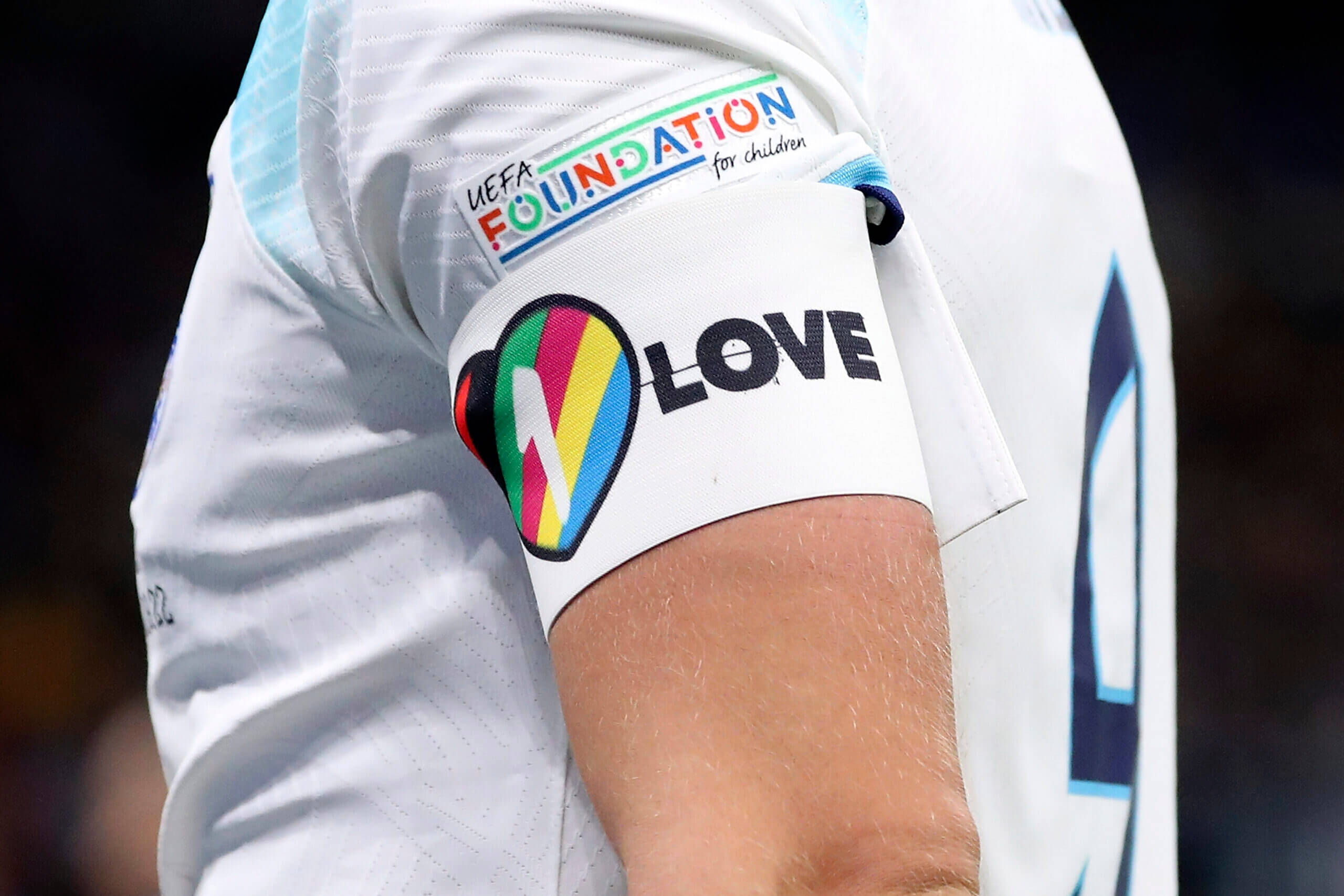 The FA One Love logo, which does not call for specific distinction (Photo: Giuseppe Cottini/Getty Images)

However, the reality is that Qatar’s enablers, so eager to protect their relationships, often do the country more harm than good. Take, for example, British Foreign Secretary James Cleverly, who recently told a radio station that British gays + people traveling to Doha should “flex and compromise” if they visit during the World Cup. It’s hard to resist the conclusion that Cleverly’s meek apology is the result of British commercial interests being closely linked in Qatar, whether that’s 1.5 billion pounds ($1.7 billion) in British contracts tied to the tournament, or RAF aircraft. To protect the skies, or the £6 billion worth of Typhoon jets Britain has sold to Qatar in recent years. In this context, the plight of LGBTQ people in Qatar appears to be an afterthought.

In fact, it remains a footnote to the sport itself. It should be remembered, for example, that when Qatar was awarded this competition in 2010, the Premier League was still several years away from its annual rainbow laces campaign, which was introduced only after the competition had been dragged and yelled at by a stunt propaganda. From Buddy Power betting. In recent years, with the World Cup approaching, the vast majority of national federations have done nothing to raise concerns about the situation of gays, Qataris and traveling fans. For example, the FA signed a Memorandum of Understanding with both the Qatar Football Association and Orwell’s Supreme Committee for Delivery and Legacy in 2018. Then-FA Chairman Greg Clark announced these relationships while standing in front of the FA’s “Football”. Logo For All” – after not consulting with English LGBT supporters + football supporters. These notes remain to this day.

Since then, Qatari authorities have made very little on record over the years to reassure LGBT citizens or visitors. They often say vague phrases like “everyone is welcome” but always the message insistently warn that visitors should respect Qatari culture, leaving people like myself, traveling to the tournament, unsure of the country’s purposeful stance on key issues. What will happen, for example, should I write about LGBT issues while in Doha over the next month? In the absence of country clarity, we are left with an absurd situation where football executives from the FA speak on behalf of a different country’s law enforcement agency.

As such, we heard from Mark Bullingham, chief executive of the FA, who broke the news in late September that gay, lesbian, bisexual and transgender couples holding hands in Qatar would not be prosecuted. “They absolutely gave us the right answers for anything we talked about,” Bullingham said, seemingly praising the tournament’s hosting.

When we step back from the surrealism of this tournament, isn’t it absolutely baffling when a football organization tells us how a country intends to enforce its own penal code when that country is so reluctant to mention such things to itself? Then we have the absurdity of that reassuring touchdown in September, eight weeks before the tournament, as if English gays have been waiting 12 years since Qatar’s win to try to get a polite nod from the FA to then start hoarding and scattering over tickets two months before the tournament. The start of the World Cup.

And if Bullingham was so confident in the host’s welcome, why did the English (and other European countries) propose an LGBT support in the tournament that only consisted of a badge with the motto “One Love”? This shows a colorful design that does not appear to be the rainbow generally recognized as a symbol of the LGBT+ community. If the hosts are so generous, inclusive and open to dialogue, why not mention “gay rights” or advocate for Qatari laws against homosexuality? Why don’t these unions of militants clearly recognize the people they claim they want to defend?

The response to the reservation may have come in newspaper I on Thursday, where a gay man in Qatar revealed he had been lured into a hotel room via a dating app and found Qatari officials waiting to attack him upon his arrival. The report said they raped him before his arrest.

Anyway, says Gianni, we’re back in football with everyone.